The ad states that this Alfetta has only 17k miles. And the interior is spotless. But sir, c’mon, it’s a car that’s representative of one of the darkest times for Alfa Romeo in terms of reliability, build quality, and compliance with smog and crash standards.

UPDATE: Auction ended up short of the reserve at $5500, which is plenty disturbing really! It has been relisted without the buy-it-now option, and is currently up to $650, which seems more reasonalble 😀

I know what you’re thinking, a little crank today TJ? Not exactly. I used to co-own a piece of shit just like this. Except ours had something like 70k miles and was on the way to the wrecker. Paul rescued it and convinced me to go halves with him, for a total purchase price of $400.

{scanned these pics in from the photo album this morning} 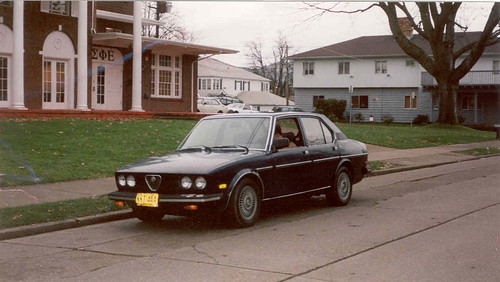 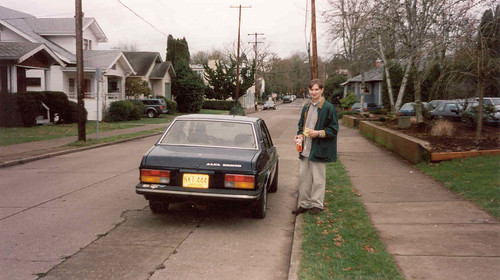 Our car didn’t look half bad from 5 feet. No major crash damage and it did run. After some loving care from Paul, it was even spirited — occasionally! And of course we were drawn to it for the same reasons the eBay seller notes:

And it had kind of an early e30 3 series look about it from the front, but in an older 510-hotrod like body. Why wouldn’t I buy in for $200?! We had beer soaked visions of turning ours into a real sprinter and using it for track days. Oh to be young and optimistic again!

My fondest memory of the car was the first drive I took solo (after Paul cautioned he hadn’t ever driven it for more than 30 minutes) which was a nice little drive out to Kings Valley. I took the back way, and was having a wonderful time motoring along in what felt like a great find. It actually started to snow, which is rare for Oregon at any time, and I was really enjoying the odd suspension, balance of the car, and rear wheel drive. A fun package that couldn’t give too much trouble.

Unfortunately, it never ran as reliably as it did that day. The car would choke and eventually die randomly, and without warning. This was very apparent on a trip to the Portland Auto Show in January of 1998(?) when we braved the 200 mile roundtrip journey. Actually she drove pretty well up the freeway. It was on the way out we had troubles. Imagine heavy traffic on MLK and our car barely running! Paul was going to explode and spent some time under the hood trying to figure out what he could do. 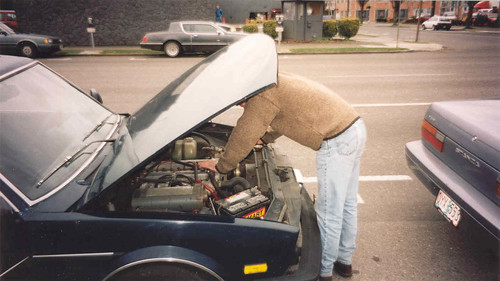 It must have been some kind of vapor-lock issue, because letting the car sit for 5-20 minutes would revive her most times. So we eventually got back in and made our way over to Gustav’s on Sandy. We arrived in time for happy hour and had some delicious fondue, sausage and several Spaten Helles mugs. And what do you know, drinking beer, like it always did, worked like a charm and the car made it home without a hitch. But after that her days were numbered.

The car was very rusty, had awful electrics that could be temporarily fixed by tapping on various components, and was in general, not easy to work with after it had been through the hands of several less than qualified hands (like mine). Not to mention our had a brutally dirty and disgusting interior that hadn’t been cleaned in a decade at least lol!

Naturally, when I spotted this one for $8500 I just about fell over. And it has an automatic, at least ours had a 5 speed!

So to the ebay seller, best of luck my man!

In 1981, I bought a 2 year old leftover (1979) Alfa Romeo Sports Sedan from Bennett in Allentown, PA. I paid exactly $8,500 and was thrilled because the window sticker was something like $12,000 +-. Oddly the car had 400 miles on it but it was still sold to me as a new car from this authorized Alfa dealership. I absolutely loved the car BUT…. it would stop running when ever it felt like. I had to wait for a period of time and then it would re-start. The dealer was unable to fix it after many attempts. I just could not rely on it. I traded it back the same year at the same dealer. It was an automatic. I think I know why it had 400 miles on it as it had not much more when it got rid of it.