So while I work on convincing my wife that a Boxster S is a tremendous idea, I’ve been doing the virtual test drive a la Gran Turismo 4. GT4 actually doesn’t have Porsches in the game due to licensing issues with other titles. But the Porsche tuner Ruf is featured. And because Ruf is so highly respected in Germany, when they tune a Porsche and sell the car, it’s actually titled as a Ruf, not a Porsche! Nice little loophole for Sony to get some Porsches in the game through the backdoor.

So I set up a little pseudo Boxster S challenge that I posted over at VWVortex, where I hang out as Dan337. The Ruf 3400s is basically a Boxster S, but with the 3.4 liter from the 911. And with the production 2000-2002 Boxster S delivering a 3.2 liter motor, it’s already pretty close. The car is fun to drive, and if the gear ratios are even close to the real one, I’m going to get arrested for that 3rd to 4th change — very close ratios at speeds well over the limit 😉

Choose the Ruf 3400 in Arcade mode, at Seattle Circuit. Before you start, rachet down the power in the settings area, to get us closer to the stock Boxster S experience, to 250hp. I did induldge in ‘soft’ tires though. 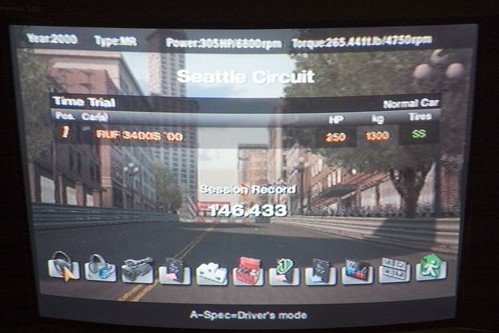 My best was 1:46.x in 5 consecutive laps. Not setting the world on fire, but a respectable lap I think. Give it a go and leave a comment with your time 😉

In other news, I added a handful of new Boxster video links to the Boxster S FAQ over the weekend.

I am now waiting for videos of your Gran Turismo driving skills. (With audio commentary…)

Luckily I don’t have a camcorder, phew!

[…] been surfing for older cars than I normally do. Though I was nearly certain I was heading towards Porsche Boxster S ownership, there could be some changes in the mix. Attempting to fight the urge of the American way […]