Paul and I hatched this little plan a few weeks before his 33rd birthday to take 3 day road trip over the July 4th weekend. The gist was to actually have no planned agenda for our weekend and to decide as the date got closer. We ended up choosing to go north towards the Olympic Peninsula and would plan our ride as we went.

Our day 1 was absolutely fantastic! We did our best to avoid interstate and chose a careful route that not only ensured mostly back road twisties-a-plenty, but also happened to be in the opposite direction of most holiday travel. Highway 47 from Forest Grove to Astoria reminded me of the Gran Turismo stage titled ‘Deep Forest‘. Blasting through gentle 35-45mph corners between the dark forest and under train trestles, on many sections of new tarmac, made for one of the most scenic and delicious rides in recent memory. The last third of the road before Astoria turns to total shit, and is even more ‘entertaining’ when wet. But the majority more than made up for it. After lunch, we pushed into Washington and took a bit of a detour on highway 101 ‘alternate’, and this road was also totally devoid of traffic, full of fast sweepers, with perfect road surface, and wide lanes that would make anyone feel like Ben Bostrom. 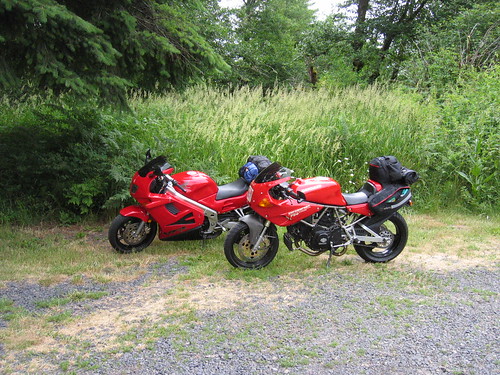 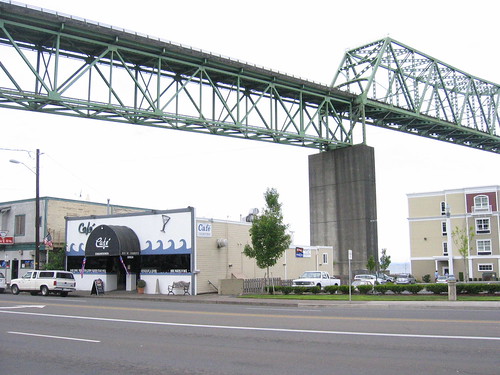 We ended the day at Lake Quinault. This wasn’t exactly planned, but it was 5:30 and we needed gas. Pretty badly too after our assault on southwest Washington. As my anxiety built, I kept hearing Merlin telling Cougar, “[…] we’ve got to land this thing. We are way low on gas!” After miles and miles of absolutely no civilization in the beautiful Olympic Peninsula rain forest, we spotted a sign stating 2 miles to the Chevron, next right. So we turned in and checked out the lake. After filling up with the best gas I’ve even put in the Ducati at $5.09 a gallon (ouch!), we cruised past the lodge and general store, and found an open tent site. Having setting up camp, we went back over to the lodge for dinner. Little did we know the lodge was actually a really nice place in the middle of nowhere. A fantastic structure built in the 20’s, it was quite opulent compared to the campground. 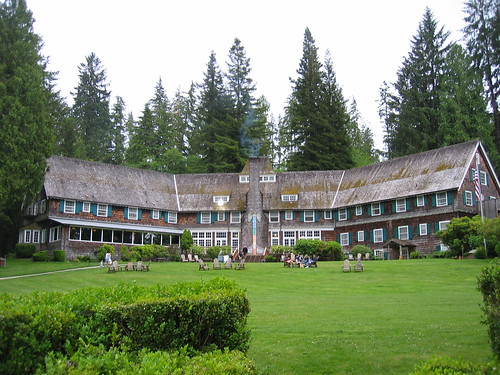 Walking in, you’re immediately greeted in the main lounge area with a bar, huge fireplace, and lots of leather furniture. Past that to the open doors of the deck features a large manicured lawn leading down a gentle slope to the lake. The lawn is dotted with small groups of Adirondack chairs and small groups of people pouring wine for each other. A wedding had just finished and the photographer was finishing up with the shots with a fantastic backdrop. 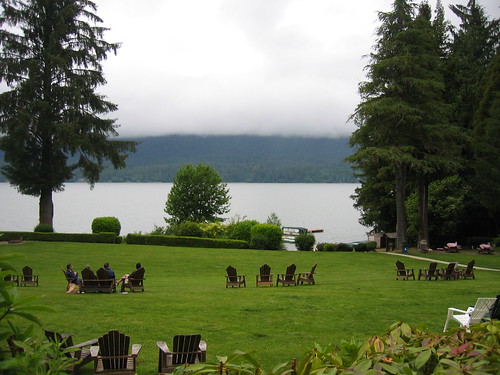 We dined that night in the Roosevelt room, named after President Roosevelt who stayed there once. They were able to seat us immediately and after browsing the menu, it was clear we were going to eat very well indeed. $17 for camping, $85 for dinner. Oh yes we did, donning bug splattered leather jackets, helmet hair and insect repellant! I recommend the beef tenderloin, it was waaay better than my pork medallions LOL!

Our Day 1 couldn’t have been more perfect. As we retired to the sounds and sights of a nice fireworks show over the lake, the rain forest began it’s thing. It started to drizzle. And then rain. All night. Every time I woke up, the rain sounded more intense. I can’t believe how dry we actually ended up considering our campsite had turned into a giant mud puddle. I guess that forestry sign that stated the region gets over 148 inches of rain a year was no joke. It was now about 8:30 in the morning and we had finally resigned ourselves to the fact that the 30% chance of showers had turned into a full on 100% downpour. 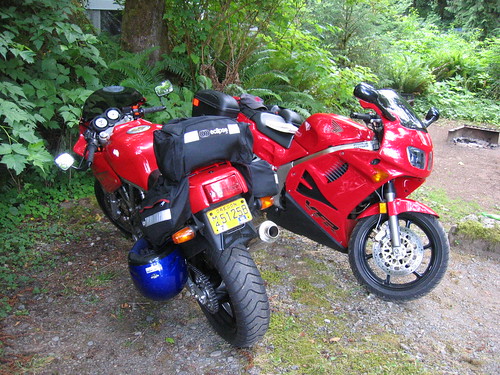 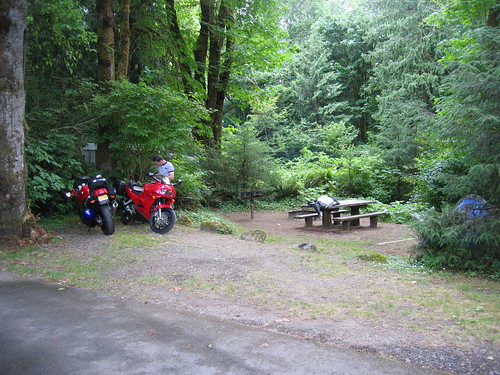 We suited up and broke camp in the rain. After a decent breakfast at the general store, we decided going around the Peninsula would only lead to an entire day of riding in the rain, and decided to head south, back in search of dry and hopefully warm weather elsewhere in the state. But after a bowl of soup at the Olympic Club in Centralia, and a search of the weather forecasts to the east, west and south via Blackberry, we realized we weren’t going to find anything like that. So we blasted down I-5 to PIR to meet Paul’s bosses, who were racing this weekend. Dodging most of the rain, we arrived just in time to see Bob take the checkered flag for his run group. 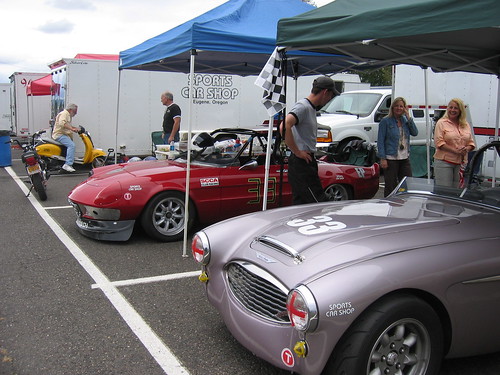 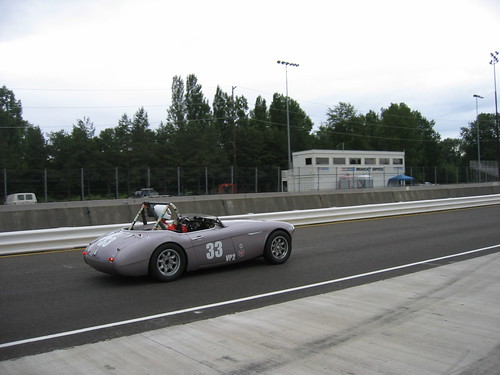 We treated ourselves to another fantastic dinner, this time at our one of favorites in Portland: Gustav’s pub at the Rheinlander German Restaurant. Their fondue is fantastic and it’s the only place in Oregon that I know of that serves the wonderful Spaten Helles. I had the prime rib and Paul had the schnitzel. I often consider moving to Portland just to eat here more often!

The last day of our trip, we headed out to our favorite back roads from the Portland area via Sandy, Estacada, Silverton, Mill City, Lyons, and finally back to Albany. We had a celebratory lunch at Calapooia Brewing (try the Pilsner, it’s perfect!) and then parted ways to finish off our weekend.

The Ducati made the trip without any hiccups and is now in need of full detail to clean out all the grime from the rain soaked roads. But it was a great and spontaneous trip with some of the best riding I’ve done since I last rode regularly years ago. Thank you Paul, for insisting we make this trip. I had a great time!

4 replies on “Motorcycling Trips to be Remembered: July 4 Weekend, 2008”

Epic post! That looks like a great trip. If I still had the M3 I would be plotting a weekend trip to the Olympics right now.

Great write-up! What can I say that hasn’t been said…? It really was a fantastic ride despite the unforeseen weather “challenges” and route deviations. We’ll have to try the Olympic again in August perhaps! 😉 -Paul

[…] a great motorcycling and camping trip that we haven’t really duplicated since. Recently our motorcycling trip to the Olympic Peninsula was our chance to relive that […]

[…] my ride to the Olympic Peninsula this past summer, I’ve been contemplating a more appropriate touring machine. The Ducati made the trip fine, […]