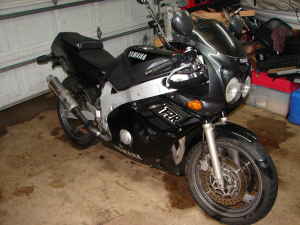 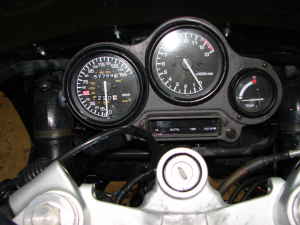 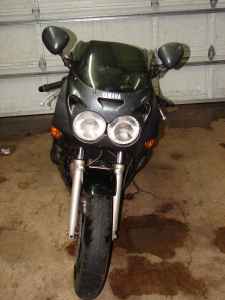 It couldn’t be right?  This bike is exactly like my first bike, seen here in the scanned archives: I originally bought mine 10 or 11 years ago for $2300, which was one of the most irresponsible financial decisions of my youth. And also one of the most fun and rewarding. And this one actually has both mirrors! Mine was owned by a bunch of kids who beat her hard and laid it over on one side. It was scratched the entire time I owned, and since I could barely afford to even own it, she got minimal care to say the least.

As I got closer to graduation, I decided I needed a car for interviews in Portland. Paul and I worked out a trade and some cash for his 84 Jetta GLi, and he really showed the bike some love that she had never seen before. The panels all came off and Paul took care of the rash I never did. He painted it black but didn’t replace the pricey side stickers, which were something like nearly $200 per side. He did some nice striping and added some logo’s and it looked great. And he sourced a carbon fiber D&D (or was it Two Brothers Racing) exhaust canister that sounded exactly like we were at Sonomafest for the races. I’m hoping he has pictures he can scan because he did a really nice job.

Paul rode that bike a lot while he owned it, including a round trip to Kansas which includes a story about getting caught in a hail storm! But I don’t think it crossed 30k miles.

Seeing this bike here in Corvallis where Paul sold it years back makes me think it might not be a coincidence. Maybe someone finally ponied up for the original decals (though they didn’t add the red stripe like mine had). But considering it’s been at least 6 years since we last saw her, I’d say it’s not entirely unlikely that someone put 3-4k miles on it a years and it’s the same bike.

I may have to contact the seller just to see… I hope it doesn’t follow me home!