I had a fantastic time again this year at the EESCC Larison Rock Hillclimb. This group has to be one of the friendliest in amateur motorsports. I feel so lucky to be able to participate in such a great hillclimb each year, less than 2 hours away, in a really scenic part of Oregon!

This year my buddy Paul joined me for the weekend event. After loading up the Rabbit at the Sports Car Shop after work on Friday, we hustled our way down Highway 58 and pulled into the (now-outrageously-priced $348 for two days!) Best Western in Oakridge. We swallowed the price because the A/C does work, it also serves as race headquarters for the event, and the internet was reliable enough for us to lose all our sit-n-go’s on Pokerstars. After flying through tech that evening, we did a couple of reconnaissance laps up the course and settled in at Mazatlan Mexican Restaurant for a really nice dinner and some cervezas. We were off to a good start already! 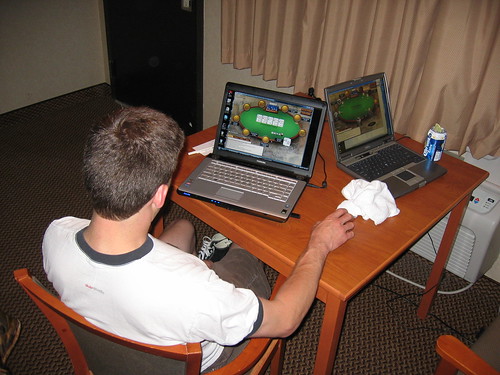 The next morning we dragged our asses out to the track by 7AM to be in time for the track walk/school at 7:30. Instructed by Brad Moffit, he reminded us of all the proper lines, areas of concern, and tips for success. As usual he did a great job, though we would be lucky to remember only a few tidbits as we returned to the pits. Realizing we hadn’t used the car at all in a long time (in fact I haven’t driven it all since the last Larison Hillclimb), the butterflies and anxiety started to mount. The forecast for the day was mid 90’s and when standing in the morning sun, you knew it was going to be a hot one. We enjoyed the cool morning shadows knowing the afternoon was going to be a killer. 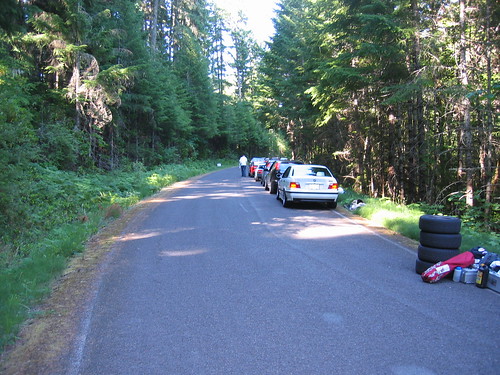 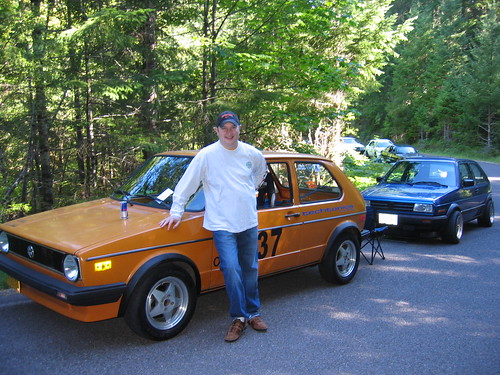 I was up first in run group 2 of 4 and I made a leisurely run up as I got familiar with the car and the course again. The car was loose and I noted that downshifting to 2nd in tight corners was really working much better than lifting and pressing on uphill in 3rd at low revs and no torque. After Paul’s run, he was in agreement. Our afternoon runs both showed improvement with the hotter temperatures really helping the tires and utilizing the 2nd gear redlining method in tight corners. 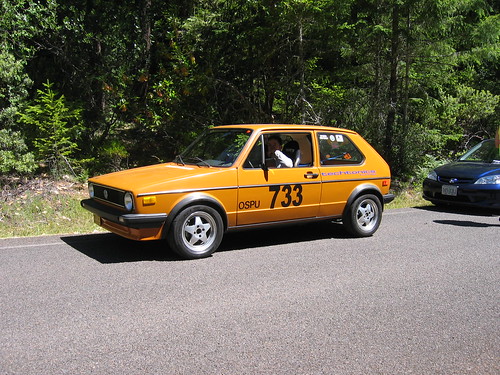 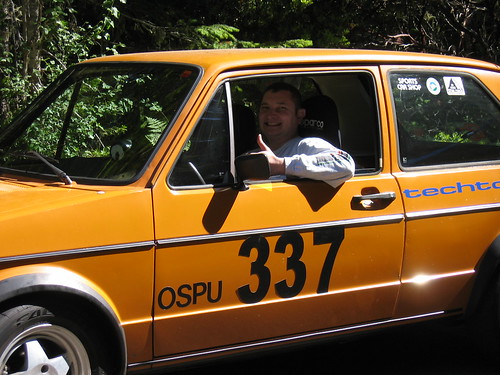 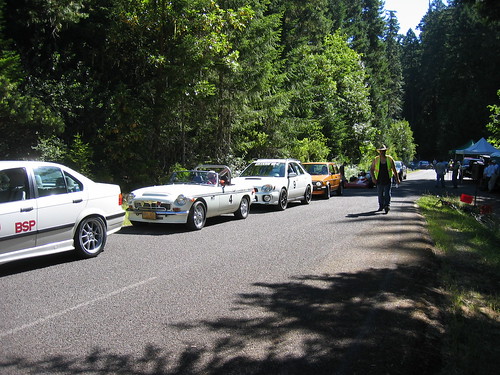 Day 1 was concluded with pizza and probably several gallons of Coors Light, going with the “light beer rehydration” theory after the hot afternoon. We drank a few with Derek who was pitted right in front of us on the hill. He campaigns a white 4 door 72 Datsun 510 out of San Francisco. Great looking car with a lot of cool mods like retrofitted MegaSquirt fuel injection on the L18, full cage, and gun metal grey alloys on both the race and road wheels. Cool Canadian guy with some impressive credentials including two trips to the Targa Newfoundland (!) and track time at Laguna Seca, Thunderhill, and Sears Point to name a few. Nice to meet you Derek, and hope to meet up next time we’re in the Bay Area.

With our times still well short of Ed’s best run last year, Day 2 started with a more serious tone. At least it did for me. While I really wanted to improve over my run the day before, what I really wanted was to beat my personal best time at Larison Rock of 2 minutes 14 seconds (and change). And it would be extra sweet if I could beat Ed’s best time, the best time ever in our Rabbit at Larison, of 2 minutes 11 seconds.

Paul was up first and posted a 2 minute 17 second run to match my best of the previous day. Fueling up on RedBull, I was ready to lay waste to the track feeling confident and juiced. After what felt like a good run, I actually ended up 3 tenths slower than the previous day. And I was bummed out big time. Having been beat by Ed the previous year at his first time at the hill, for my 3rd visit, I still had a bad taste in my mouth. I mean, he’s my close friend and all, but I’ll be damned if that wasn’t still leaving me with a rash!

Then Paul made his afternoon run after lunch, and came back in with a 2 minute 16 second run. I was really stoked for him for a while. Until it dawned on me that I may not have the goods to do any better and be bested two years in a row. As we melted back in the pits on a day that felt even hotter than the day previous, I decided to keep a good attitude at the event I look so forward to each year. I figured why not try a few changes and see how things go. No sunglasses (which had been working well for Paul), and only use 2nd gear for the two most uphill and tight corners, 6 and 8. Having reviewed the video for Ed’s best run last year, this method seemed to work for him.

After waiting on the grid for what seemed like an eternity (the most overused cliche in all of automotive writing), I made my run. And it was going really well through the first 7 of 14 corners on the track. I knew I was doing well and it really put me at ease. As I entered the long and fast turn 9 from the uphill climb of turn 8, I had just finished a rather bright sun-in-the-face ascent. I entered the darkness of the forest and my eyes took a second to adjust. The narrow road section of the “forever corner” number 9 was a touch scary and I was going faster than I ever had through here. My fastest radar speed out of 9 the day before was 70 miles per hour, and as I blew past the radar complex and slid through the bend towards 10, I knew I was going to post a really good time. I handled the last few corners before the finish and arrived at the top of the course shaking very badly with a huge adrenaline rush. Turning around to park at the top, the upper grid marshal greeted me with my time written on a yellow sticky. I accepted it from him without looking and remarked, “Tell me it’s 136 [seconds] or better”. He grinned and said, “you did alot better than that!” I looked down and saw a new best time ever at the hill for me at 133, nearly 4 seconds better than my best the whole weekend, and I was really, really stoked!

While I’m still really excited and proud of my new time, I need to give props to Ed as his time stands by nearly two seconds! Paul and I both left the hill that day thinking there wasn’t much left with the car we have in the current configuration. But I guess there’s at least two seconds before we make excuses like that. Nice job my man! And as a side note, let me also add congratulations on your wedding this weekend 😉

So before anyone goes thinking that we’re made of the Right Stuff, there were many more notable entries for the weekend. Including Sonny, who is always a top contender for the fastest time of the weekend, who posted a new personal fast time of 1 minute 49 seconds. One of the coolest dudes at the hill and almost always the fastest too. His good friend Dave Kipperman was back as well with a new Z concoction with a 364 all-alluminum v8 and massive flare and body work special (pitcured below). And the hill is dominated with a field of probably 40% A1 and A2 Volkswagens. Hard core one’s like Ty’s Red GTi and Brad’s 300+hp Scirroco. They both made sub 2 minute times look like common place — and they’re not. These guys have balls of steel and the right machinery to match their skills. 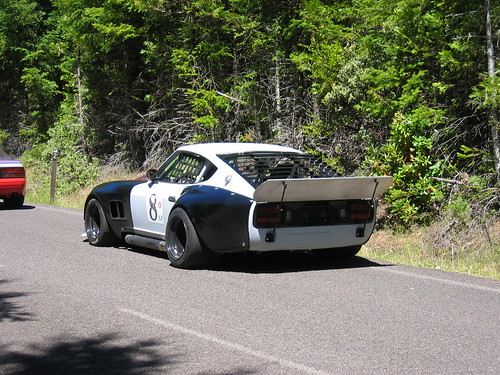 After a year out of the car, my first impression was that Paul really did a nice job over the winter freshening up of the car. Hard to believe our project car has seen nothing but basic maintenance over the last 6+ years and some severe beatings in the process. It’s a true testament to Paul’s abilities and decisions in the build. Thanks again for the best “arrive and drive” car I could have ever imagined!

And a big thumbs up to Emerald Empire Sports Car Club for another well run, safe, and really fun event. I can’t wait to go again next year!